Once a month, Humans of Expensify will profile one of our team members, because behind every great expense report, there is an even greater human.

“My political philosophy is what I call ‘libertarian anarchism.’

It’s not an official title but I like that it captures the political philosophy of libertarianism and also aligns itself with the rockstar defiance of anarchism. It’s descriptive but gets a reaction, which I like. And I grew up in a family where coming out on top of an argument was a primary virtue.

I think words are extremely powerful and just by choosing a particular label it can set people off to instantly dismiss your perspective or open your mind to think of things in a different way.

Starting those conversations is why I have consciously adopted that label. A lot of people think that they know what a libertarian is and it can be based on a sort of caricature – a reflexive reaction, especially on the west coast, that liberal is good and right wing is bad.

So this title gives me the opportunity to weaken that knee-jerk reaction. 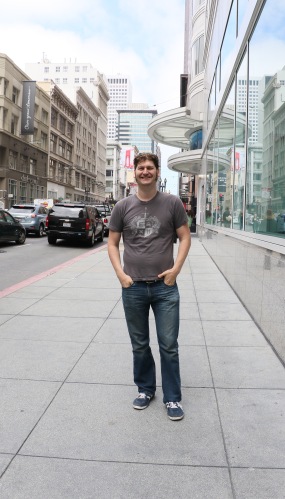 Libertarianism is about freedom, and explains how people could be free to do what they already want to do, as long as they follow a few simple rules that (almost) everyone already agrees with: don’t hurt people and don’t take their stuff.

I would say I am definitely idealistic, but I don’t consider my views utopian.

I’ve had many intense discussions with other people on the Expensify team and there are a few other people who consider themselves libertarians here, both hardcore ones like me, and more casual ones. It’s still a small minority, but I’ve got some company.”

Expensify is more than a company, we are family. We come from 5 different countries and 6 different time zones, and we all connect for one reason — to get shit done, together.