At the Expensify World Headquarters, you’ll often hear some employees talking about curling and it’s not always referring to the bash command.  Sometimes, we’re talking about the ice sport.  And to clarify, when I say “some employees” I mean me.  I started curling about a year ago and I’ve been annoying my coworkers about it ever since.  I recently took some Expensifiers curling to show them how awesome it is. 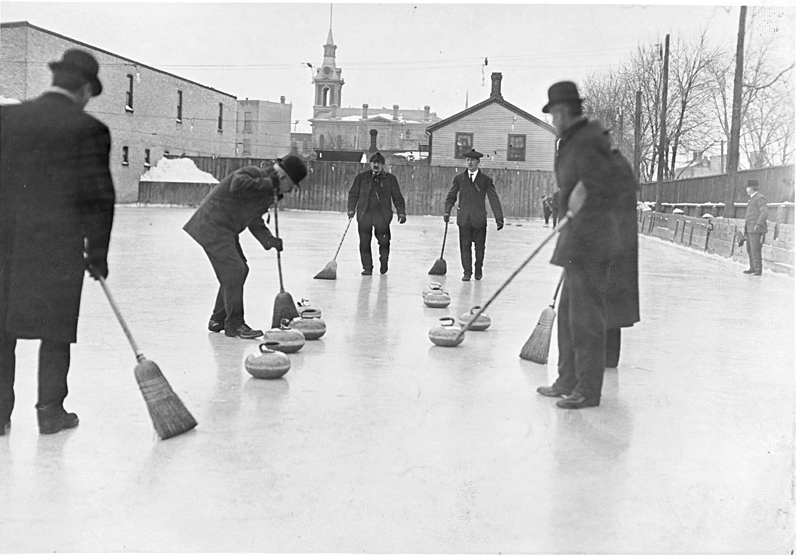 Our story begins in the 1500s, in a faraway land called Scotland, where the same quarry has been used to create the 42 lb stones.

Nowadays we play indoors (mostly) on pebbled ice, so it’s not the ice skating ice you’re used to. To give you an idea of what pebbled ice is like, imagine the once smooth ice has the topographic profile of an orange rind.  This helps to reduce friction between the ice and rock, making it easier for the rock (and player), to slide along the ice. This also makes it surprisingly easier to move on the ice.

The heroes of our story, Mike and Matt, had to first learn how to throw the stone, then sweep, and lastly compete in a curling match to the death (not really).

They couldn’t play alone – a curling team requires four people.  Each teammate throws two stones in a row, alternating each stone with the opposing team.

Our brave skip, Mike, is the team’s mastermind behind this “end” – an end is curling’s version of an inning.  He decides where Matt should aim the rock and how hard it should be thrown.
He also tells the sweepers when to sweep to ensure that it reaches its destination. 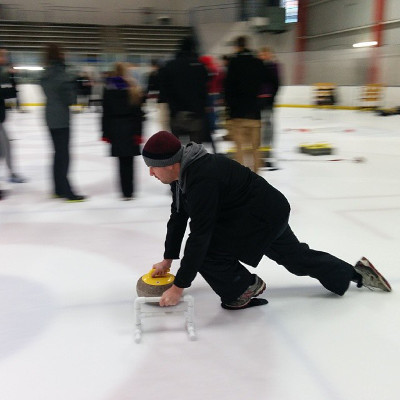 The play is up to Mike.  Will he call it so the rock glides into the house? Does he want to put up a guard stone to protect the stones that are in play? Or will the rock be thrown with such power that it eliminates an opponent’s rock from play?

Mike sets his broom on the ice, giving Matt a target at which to aim.  Matt fearlessly eases into the hack, ensuring his shoulders are square to the broom.  He slides out, lunging forwards on the ice, staring intently at his target. The moment before he releases the rock he applies a gentle turn to the handle, imparting the signature “curl”.

The sweepers walk alongside the rock, judging the speed of the rock and calling out to the skip whether they think it looks fast or slow. Mike drops to one knee, eyeing the rock’s trajectory, ready to urge the sweepers into action if needed. “SWEEP, SWEEP, SWEEEEEP” Mike yells.  The sweepers begin vigorously sweeping.  The sweeping generates heat, reducing the friction and preventing the rock from losing its momentum.

They pick up their speed to keep up with rock.  While sweeping they must ensure that they don’t hit the stone with their broom. The sweepers also need to avoid colliding with any of the other stones that are scattered on the ice. 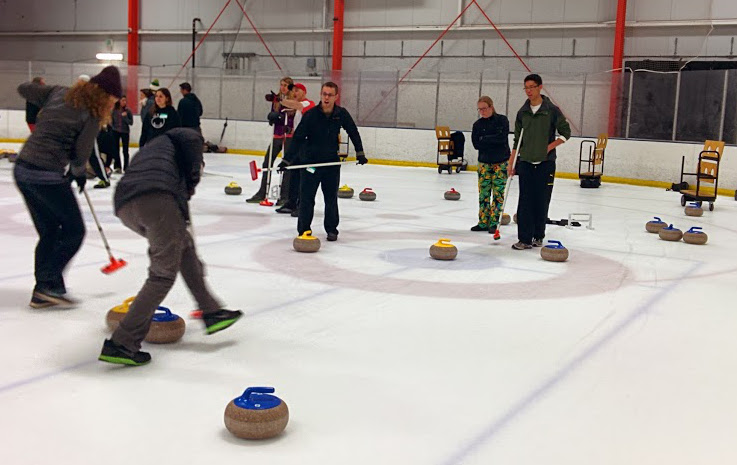 “Whoa, Whoa, OFF, Whoa” Mike yells, the stone’s current trajectory is exactly what he wants. The sweepers look up and take their brooms off the ice.  They continue to walk besides the stone, ready to start sweeping again if Mike calls for it.

The stone slows down, coming to its resting place in the the blue circle in the house (the concentric circles on the ice).

The end is over and there are four stones in the house.  Three yellow ones, and one blue one.

Only one team can score an end.

So how did our heroes do?

They rocked it! (See what I did there?)

Our heroes score two points this end.  They maintain this lead for the other 7 ends in the match and leave the ice champions.

Like after any proper curling match, they walk off the ice and into the bar.  Winning the game means they owe their opponents a round of drinks.