This is the third in a six-part series elaborating on a presentation I gave at the AlwaysOn OnMobile 2011 conference titled “Disrupting the Enterprise”. I suggest reading the first (or watching the video) and then continuing on below.

Condition #3: A Cascade of App Stores 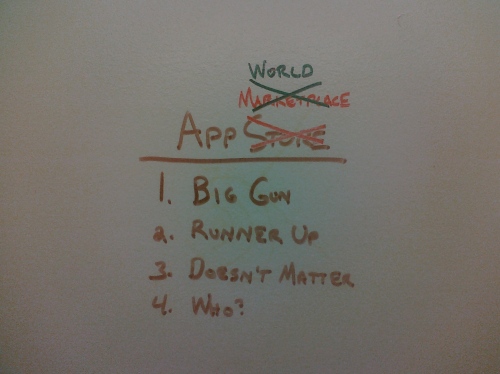 This third condition is done; it was a one-time wave that will likely never be repeated. I’m referring to the overnight rise of a series of web and app stores, and the cascading effect of new stores inhereting the rank of the old, creating a sort of “meta rank” where apps on top of one tend to dominate the rest.

It all started with the iPhone. (You might argue it started with the BlackBerry or even Sidekick, but those stores never really caught on like it did for iPhone.) It seemed like overnight a million apps appeared, vying to appear at the very top of a seemingly infinite list of applications in each category. Furthermore, because your rank was largely a function of your install rate (and your install rate was largely a function of your rank), this created a feedback loop where the people at the top tended to stay at the top and increase their lead over time: it created a strategic high ground with incredible staying power.

Quick on the heels of iPhone was Android. To a degree, the apps at the top of the iPhone App Store were the first ported to Android, and re-established their dominance in the Android Marketplace. (The difficulty of porting to a new platform allowed a bit of discrepancy to appear, but the iPhone ports came in with an advantage over original Android apps.) And then after Android came the Amazon, Verizon, and Windows Mobile app stores — each reinforcing this hierarchy to a greater or lesser degree, and each opening a brief window of opportunity that has since irreparably closed.

(As an aside, the conventional wisdom — so far as I can tell — is to just buy your way up to the top of the app store using TapJoy and its brethren, each time hoping that some of your rank sticks. This does seem to work a bit. But it also tends to flood your data with low-quality leads, such that the more you employ this strategy, the less actual awareness you have about whether any of the signups are worth having. Furthermore, it seems the quality of the installs “at the top” aren’t as good as the quality somewhere in the middle: people who scroll down a couple pages to find you seem more loyal and genuine than those that simply install whatever app appears at the top of the list. But that’s a different topic.)

The upshot is in rapid succession, the mobile app stores established a murky order that tends to slosh around a bit, but generally settle back where it started. I speak here from experience: we missed this wave, and thus our app has a very low rank on each store — and there’s very little we can do about it except fight hard each and every step. But as luck would have it, we were given a second chance.

Right after we launched, Salesforce held a fortuitous contest to create the best expense reporting app, listing the result in the Salesforce AppExchange. We did really well, and earned our place amongst the illustrious “Force 40” — the top 40 Salesforce apps. Right around then, Intuit saw the meteoric rise of the iPhone and Android app stores and thought “I wonder if we can do the same with QuickBooks?” So they came out with the Intuit App Center. And naturally, they approached us to be early adopters, primarily due to our high rank in the AppExchange. This good fortunue repeated with the launch of the Google Apps Marketplace, which obviously couldn’t launch without the top Salesforce AppExchange and Intuit App Center apps (including us). This process repeated a couple times more, and now Expensify appears at the top of all the major web app stores, much to our delight.

But all that is done. Sure, new app stores open up every day — for both mobile and web. But all the major players have already made their moves, and their not going to make them again. That wave has washed ashore, and though we can scramble along the beach for a new position, those that were washed far in have a large, enduring lead over those who weren’t.

Why you should care: If you have an app with high rank, celebrate. If you don’t, prepare for a very long, hard slog to the top. It’s not impossible — and there are snakeoil salesmen touting every dirty trick to accelerate it — but ultimately the deck is stacked against you for the forseeable future.

Tune in next week to continue the series and read about how these three conditions have created a new opportunity for selling into the enterprise in a faster, lower-cost, and higher-quality way than ever before. See you then!

Previous: Word Of Mouth is Winner Takes All (2/6)
Next: The Bottom Up Adoption Curve (4/6)